Geek and Gamer Girls Sing Out

In the new parody video “Geek and Gamer Girls,” four gals proclaim their love of all things geek; from Final Fantasy to Joss Whedon and Hasbro toys. The video comes from a group of friends who call themselves “Team Unicorn” – Clare Grant, Milynn Sarley, Rileah Vanderbilt and Michele Boyd. I recently spoke to Grant — whose husband, Seth Green, appears and raps (!) in the video — about how the project came about.

As Grant explained, “Michele and Milynn were coming back from the beach and blaring that Katy Perry ‘California Girls’ song when Milynn had the idea pop into her head. They started throwing lyrics together as quickly as possible and then called Rileah and I and got us into it.” Grant said there was then “a big pow wow” regarding what the exact lyrics should be and what references the four girls wanted to include. “We were honestly tweaking the lyrics to this song up to when we were in the recording studios, laying down the tracks.”

From Buffy to Robot Chicken (among his million other credits), Seth Green of course is a very well known person in the fanboy world, and when it came to including him, Grant remarked, “Honestly, even if I weren’t married to Seth, he would have been an obvious choice to do the rap part of the song. It wasn’t like I was asking him as his wife to come be in our music video. I don’t want to abuse our relationship in any way. But I believed in this song and believed in the video and really through that Seth would be the best person for that part. So when he read it and saw what we were trying to do, he jumped on board willingly.”

As for the two other big cameos in the video, Katee Sackhoff and Stan Lee, Grant told me, “We knew right off the bat that we wanted to get Stan Lee. And everybody knows that Stan Lee loves to make cameos, so we thought that would be pretty easy. As it turns out, he was definitely willing and so sweet and so fun to play with. And then I think Seth reached out to Katee and was just like, ‘Hey, will you be in our music video?’, and she was all about it. We’re both such Battlestar fans.”

Grant said the video most definitely displays her and her friends’ real interests. When it came to the character costumes they wore, I asked how they decided who would wear what and she replied, “Let’s be honest here – I have a closet full of costumes that I have either made for myself or tracked down. Milynn is the same way. She’s bought several costumes. So the Psylocke costume was her own, that she wore at Comic-Con this year. The Baroness costume is Rileah’s, that she actually made herself. That was her Halloween costume last year. I’ve gone as Lara Croft so many times to so many things I can’t even count anymore. And the Han Solo outfit was actually my costume, but Michele was so awesome, it seemed like a natural choice.”

There are also portions of the video in which Grant and the other girls are, well, not wearing much of anything. Grant noted they were parodying Perry’s “California Gurls” video, in which Petty appears “naked, lying on clouds,” which they wanted to emulate but not directly copy. “The director, Dave Yarvo, it was his suggestion to pay another homage to a great movie, American Beauty. So that’s where that came from.”

When it came to those moments, Grant noted, “That’s where we’re getting a lot of negative feedback from, is actually those particular American Beauty shots, which we don’t really understand. We don’t really understand why it’s bad to be sexy. We are who we are and we happen to love all of those things. I think that if we were different shapes and sizes, we probably would have done the exact same set up, and maybe people wouldn’t be giving us such a hard time. We weren’t trying to alienate any female gamers out there who don’t physically match our descriptions. We were actually trying to be inclusive. When we first started talking about the video, the most major point of discussion that we had was doing our best to not alienate any females whatsoever. We were actually really surprised by the negative reaction from that, because after all, we’re showing as much skin as any girl would show in a bikini.” 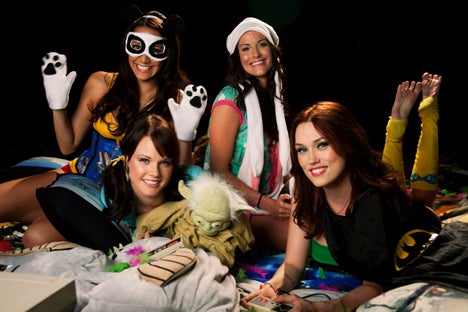 As to anyone questioning whether she or her friends are really “true” geeks, Grant said, “I have gotten that reaction my entire life and I kind of just laugh at it. Everybody’s really positive [about the video], but a lot of people are like, ‘What? That’s not true! They hired models!’ I’ve been a female geek and gamer literally my entire life and I tried stopping to defend myself when I was 12 years old.”

Regarding her fangirl origins, Grant explained, “What introduced me to things in the geek world were videogames. I was introduced to the original Nintendo system when it first came out and was just obsessed. My life literally revolved around videogames until I was 18 years old. There was this game called Dragon Warrior. If you were a subscriber to Nintendo Power, which I’ve been since the very first issue, then you had the option of getting a free gift if you wanted to subscribe. One of the options was to get Dragon Warrior. I just liked dragons. I was in the fourth or fifth grade and I was like, ‘Dragon Warrior?! That sounds awesome!’ That game came in the mail and totally changed my life. And that started my obsession for all things fantasy.”

Asked what she’s most into these days in the geek world, she told me, “Maybe now it would be an equal tossup between fantasy books and videogames for me. I’m wrapping up Final Fantasy XIII, which has been a lot of fun. I’m secretly obsessed with New Super Mario Bros. Wii. It’s so much fun! I can’t stop playing that game. I’m excited about Halo Reach. I’m not as into first person shooters as a lot of friends that I have, which I think alienates me a lot from a lot of gamers, but I don’t really care. I think I play more action games and RPG games than anybody I’ve ever known in my life.”

As to whether she and Team Unicorn might do a follow up to “Geek and Gamer Girls,” Grant said, “I would love to do another music video. We never set out to do something in particular. We’re just friends who like to hang out and nerd out together. And occasionally we cosplay as Sailor Moon characters at Comic-Con. But the video just came out of nowhere. We’re trying to think of new things to do. We’ve tossed around other song ideas for videos. Hopefully we’ll all find one that really speaks to us.”