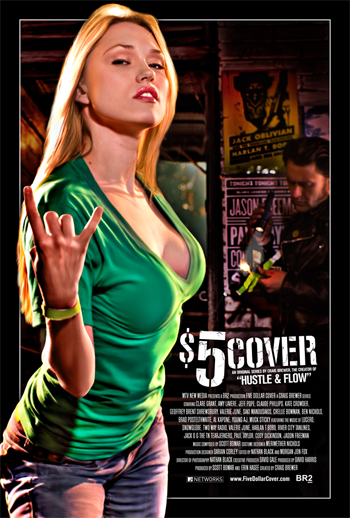 Teaming up again with fellow Memphian, Craig Brewer, Clare Grant stars in this MTV television series, $5 Cover, about the trials and tribulations of the current Memphis music scene. Check out the website to watch the series on line, or watch them here below.

Meet Amy LaVere, Clare Grant and other heroes of the Memphis music scene as they slip in and out of conversations, bands and their clothes. In this episode, Amy scrambles to replace her drummer after an affair gone wrong. Watch all $5 cover episodes.

Clare Grant is persona non grata after getting caught in her friend Amy LaVere’s boyfriend’s bed. In ‘Head Change’ she tries to salvage her good name between Muck Sticky performance clips. Watch all $5 Cover episodes.

It’s hard to have a code in Memphis… The Amy / Clare / Nick love triangle thickens as the Memphis music circle’s romantic drama escalates. It all comes to a head at a smokin’ Harlan T. Bobo show. Watch all $5 Cover episodes.
MTV Shows

The struggles of parenting in a difficult marriage aren’t enough to keep the music off of Two Way Radio vocalist Kate Crowder’s lips. Stop by her coffee shop gig and see what she has to offer. Watch all $5 Cover episodes.

Track 5: ‘Skills Of The Father’

Al Kapone works all week long, even on Surrrday. This time around he brings his son AJ along to lend a hand. Later they connect with Brad and Packy at the studio to lay down a new jam. Watch all $5 Cover episodes.

Track 6: ‘Jacked Up And Crying’

Wally gets a new job where he may or may not be moving in on Amy. Jack O And The Tennessee Tearjerkers perform. Watch all $5 Cover episodes.

Having sworn off dating drummers, Amy LaVere does what any red-blooded leading lady would do: falls for another drummer. Watch ‘The Multi-Instrumentalist.’ Watch all $5 Cover episodes.

In ‘Heart And Soul,’ after an argument over rent money, Packy and Brad find themselves in some serious medical trouble. Lucky for them, Brad is an EMT. Watch all $5 Cover episodes.

When bad-boy Lucero singer Ben Nichols comes home for a show, Clare Grant’s story comes into focus. She runs around with other people’s hearts because somebody’s already got hers. Watch all $5 Cover episodes.
MTV Shows

Episode 10 opens with Clare Grant’s seductive heavy breathing and ends with a lovelorn look from Muck Sticky. Find out what’s got them both so worked up. Watch all $5 Cover episodes.

Clare and Nick get hot and heavy — like, really hot and heavy — after a wild night at the roller derby. Don’t miss a smoking performance by River City Tanlines. Watch all $5 Cover episodes.
MTV Shows

Not even a heart attack can stop a Memphis BBQ. But when the reality of last week’s drama sets in, no amount of fun in the sun can overshadow the awkwardness. Watch all $5 Cover episodes.

Party week continues on $5 Cover when the whole crew shows up to Packy’s studio for an epic recording session and a big announcement. They’re starting a record label! Watch all $5 Cover episodes.

Clare tells Ben to shove it, Wally and Amy’s sexual tension comes to a head and Snowglobe rocks the s— out of Packy’s Halloween record label launch party in the most dramatic season finale you’ll see all year. Watch all $5 Cover episodes.


Error: API requests are being delayed. New posts will not be retrieved.

Error: API requests are being delayed for this account. New posts will not be retrieved.

Make sure this account has posts available on instagram.com.

As a kid: CLUE 🗝
As a teen: Pulp Fiction🚬
Now: Spider-Man: Into the Spiderverse🕷

@ClareGrant Favorite movie as a kid? As a teen? Favorite film now? 🎬

One of my favorite humans and friends is producing his first solo standup comedy special and I couldn’t be more excited for him!! Love you forever @mattrife!!

HERE IT IS✨
I’m self producing my very own Standup Comedy Special this May!
Will be filming in LA, and is going to take an army! If anyone would like to help support this dream in the making, hit the link below! ❤️💪🏼
It’s time to apply pressure! 😤