The Robot Chicken Nerd, Humping Robot and more will be paired with the world’s most iconic and amazing heroes, plus Aquaman. Joining the fray is DC Entertainment Chief Creative Officer and frequent Robot Chicken collaborator Geoff Johns, who knows a thing or two about superhero hokey-pokery. 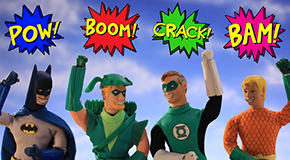